aka, LARD & human health.
What is lard?

Real Lard is rendered pork fat (also called tallow if it comes from a ruminant such as beef cattle).

Rendering is gently heating the fat to separate out the protein strands, the ‘cracklings’.

Real lard is a beautiful, white, naturally-partially-hydrogenated solid fat. Most of its carbon sites are filled with hydrogen in their natural and normal cis position just as it comes from the hog.

Good lard is only

Lard is stable and is the preferred fat for frying because it does not easily turn into trans fats when heated. Foods fried in lard can therefore be cooked for a shorter time at a higher temperature resulting in a better taste, texture and less embedded oil.

Lard is a HEALTH FOOD that needs to be returned to its rightful place in the American diet!

There are two essential fatty acids (essential because our bodies cannot make them) and both are polyunsaturated, 18 carbon molecules. These are the OMEGA 3 and OMEGA 6 fatty acids, and there has been a lot in the media in recent years about them and their relation to human health.

The healthful Omega 3 fats include:

Commercially-raised, factory-farmed pork get virtually no exercise, live indoors (often in squalor) and eat no greens. Because of their diet, their lard is of equally low quality. The diet and lifestyle of the hog radically affects the quality of the lard! What a concept.

People always seem to be surprised by this, but I compare it to two humans, one of whom lives a livestyle as a couch potato, eating highly-processed, starchy foods and getting very little exercise and fresh air. In comparison, the second human is an exercise buff, who eats a diet rich in natural foods and spends much of his/her time out-of-doors. How do you think these two humans would fair in terms of their cholesterol levels and fat to meat ratio?

Confinement pork lard has similar OMEGA 6:3 ratios to feedlot beef with a 100gm serving containing about 8 grams of Omega-6 and 0.8 grams of Omega-3. That works out to a ratio of 10 to 1!

A much more healthful ratio of O-6:O-3 can be achieved by increasing the amount of fresh green forages. The O-3 content can be greatly enhanced by feeding flax seed, sea greens, green algae or fish oils but simply putting animals back on pasture can profoundly change their omega fatty acid to something approaching the quality of fish oils!

It should come as no surprise that hogs fed garbage will incorporate all the toxic trans fats, heavy metals or other toxins into their fat. By-products of commercial, processed food operations (think potato ship crumbs from the factory floor) are often touted as a ‘great source’ of cheap feed for hogs and even ruminants like sheep.

Shortening, for example, is a liquid oil until manufacturers heat it up under pressure and bubble hydrogen gas into it ! Can you imagine!!

Why do they do this you might ask? Because hydrogen added in the trans configuration increases shelf life of the oil and allows vegetable oils and corn oil not to go rancid in large, clear containers exposed to light and heat on the store shelves.

A lot of hydrogen added in the trans configuration solidifies the liquid oil, creating stick margarine or solid vegetable shortening, such as Crisco.

Fats are made of FATTY ACIDS which are carbon-hydrogen chains (C-C-C-C-C-C-C-C-C-C) that latch on in groups of three to a glycerol backbone to make a TRIGLYCERIDE molecule, which are the basic molecules of which all fats are made. The length of the carbon chains and where, if any, double bonds (i.e. missing hydrogen molecules) occur differentiate the fatty acids one from another.

The main saturated fatty acids (from shortest to longest chains):

The main monounsaturated is OLEIC acid.

Olive oil contains 71% OLEIC acid and is heart-healthy, monounsaturated fat that we’re supposed to get more of.

1. Lard also contains 14%) of the 18-C saturated fat STEARIC acid, which has been shown in clinical testing to lower cholesterol.

2. Lard contains 2% MYRISTIC acid, a 14-C saturated fat that has been shown to have immune enhancing properties. Human butterfat is 8% myristic acid, cottonseed oil (1%) and the tropical vegetable oils (coconut oil and palm kernel) have zero.

So Lard’s basic fatty acid composition is comparable to the butterfat of human breast milk, with even less saturated and more monounsaturated fatty acids. 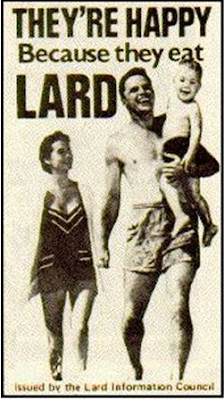 • Saturated fats make up over half of all cell membranes and give cell membranes stiffness and integrity.
• Bones require about 50% of the dietary fat to be saturated so calcium can be absorbed.
• Saturated fats lowers Lipoprotein-a in the bloodstream, an inflammatory marker directly associated with the risk of heart disease.
• Saturated fat protects the liver from alcohol, toxins and drugs and they enhance the immune system.

Omega 3 fats are retained in the tissue when the diet is rich in healthy saturated fats. Heart muscle contains rich deposits of stearic acid and palmitic fatty acids as energy sources during times of stress.

Many saturated fats have antimicrobial properties and protect us from harmful pathogens in the intestine.

There is no good scientific evidence to back up claims that saturated fat causes clogging of arteries per se.

In fact arterial plaque is only 26% saturated fat – the other 50+ % being polyunsaturated fat!

Our bodies need some cholesterol and it is only found in animal fat.

Cholesterol makes up a large portion of brain tissue and is the building block of all corticosteroids and hormones in the body, and is a precursor to vitamin D.

Cholesterol keeps our skin soft and moist, and makes the bile which we need to digest fat.

Human breast milk is very high in it.

Our bodies make over 2000mg of cholesterol daily whereas a maximum of only 100mg can be absorbed from the diet.

Cholesterol is required for proper function of serotonin (the ‘feel good’ brain chemical) such that low cholesterol levels are associated with aggression, violence, depression and suicidal tendencies.

TRANS FATS are one of the most dangerous foods in the world. They serve no purpose in the body except to cause inflammation, cancer and degenerative disease.

Trans Fats began to enter the diet of Americans in the early 20th Century which coincided with a new problem of heart disease in America. Nowadays, most Americans consume up to or more than 20% of their fat intake as trans fats.

Tranfats cross the placenta and are incorporated into fetal tissue, even the brain. Cell membranes are a bi-layer (two-sided) of fat with a thin protein coating on both sides.

Some people feel that if Trans Fats gets are incorporated into cell membranes, they become defective and won’t resist infection and are more cancer prone.

Trans Fats may cause problems in the brain as DHA or other brain fats cannot be made from it, and the stiff and straight abnormal molecule creates overly rigid membranes.

Consequently, some people feel there may be an association between a diet in Trans Fats and the incidence and clinical course of brain disease like MS, ALS, Alzheimers, Parkinsons and maybe even depression, schizophrenia, and other mental illnesses.

Lard can be obtained from any part of the pig as long as there is a high concentration of fatty tissue.

The highest grade of lard, known as leaf lard, is obtained from the "flare" visceral fat deposit surrounding the kidneys and inside the loin. Leaf lard has little pork flavor, making it ideal for use in baked goods, where it is treasured for its ability to produce flaky, moist pie crusts.

The next highest grade of lard is obtained from fatback, the hard subcutaneous fat between the back skin and muscle of the pig.

The lowest grade (for purposes of rendering into lard) is obtained from the soft caul fat surrounding digestive organs (the omentum), such as small intestines. Caul fat is often used directly as a wrapping for roasting lean meats or in the manufacture of pâtés.

Lard in history and its use in food.

Lard has always been an important cooking and baking staple in cultures where pork is an important dietary item, the fat of pigs often being as valuable a product as their meat. Obviously, it is also prohibited by dietary laws that forbid the consumption of pork, such as kashrut and halal.

During the 19th and first-half of the 20th Centuries, lard was used in a similar fashion as butter in North America.

As a readily available by-product of modern pork production, lard was previously cheaper than most vegetable oils, and it was common in many people's diet. During the industrial revolution, new techniques were developed for the production of vegetable oils and they became more common and more affordable.

NB: Bear in mind, this would have been for the first time in human history!

Vegetable shortenings were developed in the early 1900s, which made it possible to use vegetable-based fats in baking and in other uses where solid fats were called for.

Toward the late 20th century, lard began to be regarded as less healthy than vegetable oils (such as olive and sunflower oil) because of its high saturated fatty acid and cholesterol content.

NB: Despite its reputation, lard has less saturated fat, more unsaturated fat, and less cholesterol than an equal amount of butter by weight.

Unlike many margarines and vegetable shortenings, lard contains no trans fat.

Many restaurants in the western nations eliminated the use of lard in their kitchens because of the religious and health-related dietary restrictions many of their customers demanded in an effort to ‘eat healthy’.

Many industrial bakers began substituting corn-fed beef tallow for lard in order to compensate for the lack of mouthfeel in many baked goods and free their food products from pork-based dietary restrictions.

Luckily, following this disasterous switch to high-trans and hydrogenated fats in the 1960’s and 70’s, the unique culinary properties of lard were rediscovered (never having been forgotten by French chefs) leading to a partial rehabilitation of this fat among "foodies" and chefs in this country. This trend has been partially driven by negative publicity about the trans fat content of the partially hydrogenated vegetable oils and in vegetable shortening.

It is also again becoming popular in many countries as people have explored and rediscovered the virtues of traditional cuisine over modern ‘healthy food’.

Lard is one of the few edible oils with a relatively high smoke point, attributable to its high saturated fatty acids content. Pure lard is especially useful for cooking since it produces little smoke when heated and has a distinct taste when combined with other foods. Many chefs and bakers deem lard a superior cooking fat or shortening because of lard's wide range of applications and taste.

Because of the relatively large fat globules found in lard, it is extremely effective as a shortening in baking. Pie crusts made with lard tend to be more flaky than those made with butter.

Lard was once widely used in the cuisines of Europe, China, and the New World and still plays a significant role in British, Central European, Mexican, and Chinese cuisines.

Lard consumed as a spread on bread was once very common, especially those areas where dairy fats and vegetable oils were rare. A slice of bread spread with lard was a typical staple in traditional rural cuisine of many countries.

As the demand for lard grows, many small farmers have begun to specialize in heritage hog breeds with higher body fat contents than the leaner, modern hog. These were the traditional ‘lard pigs’ of history that were raised just as much for their valuable lard as for their wonderful, flavorful meats.